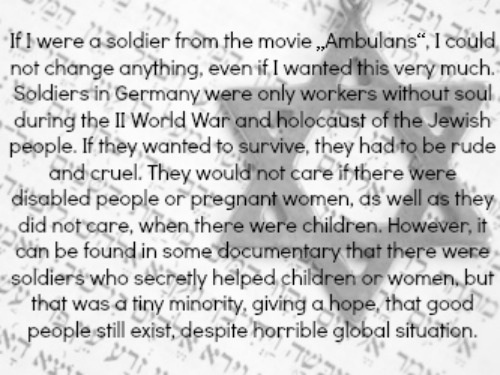 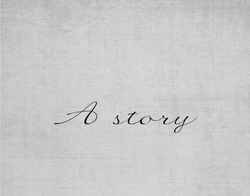 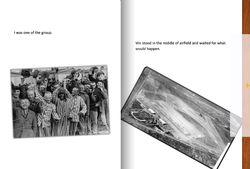 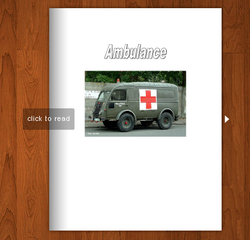 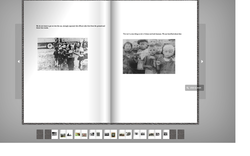 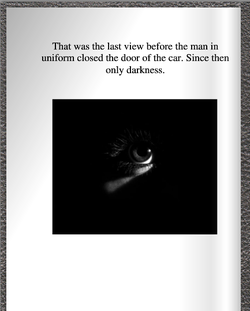 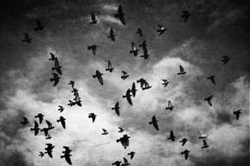 I flew around the world every day. I flew to search for food. I saw a very cruel view ione  day. Some of people, I think they were soldiers, took some children and one man into the car. They waited in the yard which was surrounded by fence. One of the soldiers had a dog. The children played with kind a toy which was released and flew outside the yard and fence. The soldier released the dog and it ran to catch it. In my opinion, this situation was very interesting and some of the things say one, but mean something quite different. 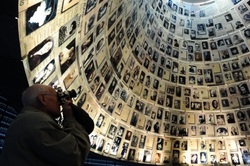 That was the last day of our unbearable misery. I and those poor kids were told to wait for an
ambulance near the gates because of the epidemic risk. While waiting, one of the soldiers took a dog with
him. Funny, it seemed that we were going to escape somehow… Suddenly, an ambulance appeared in the
distance and I felt a bad feeling about that. The children were calm, because they had no idea why they even
were in the ghetto. However, when I saw that this is not an ambulance but a ‘death’ car, I realized that
maybe it’s better in this way, because those children did not deserve to live under these circumstances.
Anyway, I took a last glance at the sky and I saw birds – a symbol of freedom. How ironic this is, isn’t it..? 8 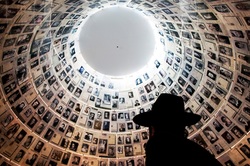 I  am a soldier
One more new report from our government. We are to vanish one more disgusting group of kids. Boring, but necessary. Considering the fact it was necessary, we went there. There was nothing but the grout of brats and their boring teacher. Ok, some more Jewish group to take down, I thought. We were not allowed to make fun of them, so we just put them into gas camera. It was easy for them to die. The children were very little, but well, the younger they are vanished out from our world, the fresher air we can breathe in. 9

The second world war was cruel and ruthless. Especially for us - Jewish people. The Nazis made a plan to purify their nation, the plan consisted of killing all the Jewish people. The last day of my life began like every day, at 8 o'clock I started my lessons at a secret Jewish school. Everything was as usual, but it changed very soon. The Nazis soldiers took us and derived us to the countryside, to some large square in an empty area, it seemed to be some airplane runway. However, they left us there and after few minutes the "ambulance" came. First, I and my little students didn't understand anything that was going on around us. Later I realized that the "ambulance" was a killing machine. Hitler discovered one way to destroy the Jewish nation - kill  all the Jewish kids. So my life and the life's of my students ended in an ambulance...7

Video about Holocaust was really scary.If I was one of the children from this video,I would feel terrible. I would see an angry dog,angry officer and a frightened  teacher. I would be just a kid and I would not understand, what was going on there. Moreover,I think I would start crying when soldiers drove us in ambulance car. I would be very frightened and I would not know what to do. The children from the video didn't understand that they would die, but they felt very bad. Holocaust was really brutal thing murdering millions of jewish peple.